Guest Writer on Behalf of ROTC 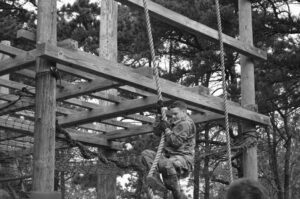 Members of the Reserve Officers’ Training Corps at Providence College share their experiences from this past weekend as they participated in field training exercises and were assessed on their skills.

Basic course cadets, those participating but not contractually obligated to serve in the U.S. Army, learned basic soldiering skills throughout the semester to prepare themselves for the tests they would face over the three-day training event.

Advanced course cadets, those typically in their junior or senior year of academic study and contracted for further military service, were primarily tested in their planning and leadership skills necessary for successful service as 2nd Lieutenants in the U.S. Army, Army Reserve, or Army National Guard.

What were you tested on?

During the weekend-long assessment, cadets were tested in land navigation techniques both during the day and night time to test their competence and confidence navigating the wooded terrain with only a map, compass, protractor, and their wits. As the first day of evaluations ended, cadets moved tactically through the wood line, and established “patrol bases” to sleep, refit, and eat “MREs”(meals ready to eat), in preparation for SSTX (Squad Situation Training Exercises) on day two.

Hours later, cadets awoke before dawn and broke off into eight to twelve-person teams called “squads.” These small teams, led primarily by cadets in the junior class, executed five missions which tested their critical thinking, time management, land navigation, and tactical knowledge. During these missions, cadets frequently encountered “SAPA” forces—the South Atropian People’s Army, an insurgency group in the fictional country of Atropia, was played by senior cadets acting as the main antagonists to the American forces operating in the training area.

Day two concluded with cadets occupying another set of patrol bases and defending against SAPA attacks on their defenses throughout the night.

How were you tested on leadership?

The final day of the training event concluded with the “Leader’s Reaction Course” and the “O-Course.” The leader’s reaction course consisted of obstacles designed to challenge cadet’s leadership and problem solving skills. Cadets were read a script of instructions and given an accompanying mission. The tasks frequently included maneuvering a list of props, typically a collection of ropes, ammunition cans, planks, and other equipment in such a way that cadets could traverse the obstacle and complete the designated mission.

After attempting five separate obstacles, cadets were then led to the “O-course,” a standard military obstacle course which included obstacles in excess of thirty feet high. One notable obstacle, appropriately named “The Tough One,” required cadets to successfully climb a 15 foot rope, walk across a series of planks, climb an additional 15 foot ladder, climb over the side, and down a thirty foot cargo net. The culminating portion of day three involved squad races through the course and recognition of the winning team with a day off from physical fitness training the next week.