Are You Yeti For Holiday Films? 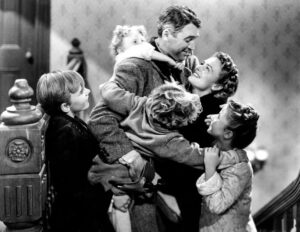 It is that time of year again, the nights are long and harsh, and students feel the impending doom of finals looming closer. That being said, however, it is also the best time of year to seek refuge in bed with a cup of eggnog and just hibernate with some good old television. If you are looking for some classic movies to brighten your days and put you into the holiday spirit, check out the following films:

It’s a Wonderful Life: How can the list not start with the movie everyone’s grandmother makes them watch every December? One of Hollywood’s most iconic actors, Jimmy Stewart, plays George Bailey, who discovers the meaning of life at Christimas time with the help of an angel trying to gain his wings.

Lethal Weapon: Although it is not a typical holiday movie, it is set during the holiday season. By far the greatest buddy cop series of all time, it follows Mel Gibson and Danny Glover as they fight crime in the streets of Los Angeles. It is filled with laughter and suspense.

Eight Crazy Nights: Comedy legend Adam Sandler has made it a point in his music career to write songs about Hanukkah themed traditions. Christmas music lovers are guaranteed to hear “The Hanukkah Song” at least once every December, but Sandler also created the animated comedy Eight Crazy Nights. The movie follows a character based loosely on Sandler as he returns home for Hanukkah and all the hilarious events that ensue.

Home Alone: How could the hijinks of Kevin McCallister (Macaulay Culkin) not be on this list? It is Christmas time and what better way to celebrate than taking the family on vacation? “Where’s Kevin?” Watch as an eight year old left alone for the first time manages to outsmart professional criminals with booby-traps galore in this heart-warming tale about being alone on the holidays.

National Lampoon’s Christmas Vacation: With every family gathering, there is always the possibility of something going wrong. For the Griswolds, who are just trying to move past their disaster of a vacation to Wally World, everything goes wrong again. Watch as the Griswolds cannot get anything right as their hilarious family gathers for the holidays.