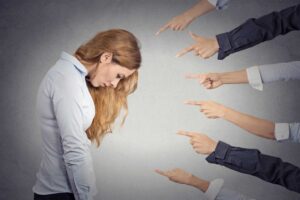 The campus climate survey on sexual misconduct and relationship violence that was recently distributed to the student body is considerate, thorough, and extensive. However, it misses one key aspect of the sexual harassment problem: slut-shaming.

The term “slut-shaming” is thought by many to be problematic and counterproductive, but it is the only term that properly expresses its meaning. Slut-shaming is the stigmatization of sexual promiscuity in women.

We are all aware of the gaping double standard. It is perceived as more socially acceptable for straight men to have sex with however many women they like while women have no such privilege.

Universities in the United States. have been reserved for men since the 1600s.Thus, academia and collegiate activities carry a determinedly masculine association. Only recently were women—women with white skin and resources, that is—given the chance to advance themselves through higher education. Of course, the intersection of race and class complicate this history.

When a woman enters a space traditionally reserved for masculine activities, a certain standard of professionalism and respectable behavior is placed upon her. She must, through her behavior and stellar achievement, prove that she deserves to be there.

The issue of slut-shaming on the Providence College campus stems from the expectation for women on college campuses everywhere to go above and beyond what is expected of men. Slut-shaming is the manifestation of this power imbalance between men and women in a place that was never reserved for the latter.

Unfortunately, the campus climate survey lacks questions challenging students to reflect on slut-shaming. In a unique instance, the survey asks students to mark the degree to which they agree with the statement, “If a woman hooks up with a lot of men, eventually she is going to get into trouble.”

This question is the closest thing to “slut-shaming” found on the survey, but it is actually about victim-blaming, which is an entirely different problem. The campus climate survey simply does not address the problem of bullying or harassment directed at female students who choose to be sexually active.

The social acceptability of slut-shaming on our campus is a part, if but a small part, of our campus culture—a culture undeniably tied to the school’s strong religious affiliation. Those who were raised Catholic know the indoctrinated sense of urgency surrounding the preservation of a woman’s sexual purity. Though contemporary Catholic thought on feminine purity brings modern nuances and does not always imply strict restrictions on women’s bodies, the unconscious association of sexual purity with superiority persists.

It would be paradoxical for the College’s Catholic affiliation to be a contributing factor to a campus climate of harsh and unnecessary criticism. For this reason, future campus climate surveys should challenge students on their participation in slut-shaming. They should also ask students the reasons behind what they believe about another woman’s right to engage in sexual activity.

Individuals that hold a religious, cultural, or personal belief in maintaining a level of sexual purity should be respected for that. There is nothing oppressive in the Church’s teaching for a believer who holds these values true.

However, there is something very oppressive about expecting others to hold the same values as you and shaming them if they do not. For women who do not believe that they must uphold a sense of sexual purity, their body is theirs to dictate.

One preventative measure that must be taken against slut-shaming is to identify it as a serious issue through the next campus climate survey, and to establish a new campus norm surrounding empathy and acceptance for future Friars.

Ray Composting: How Much Waste Have We Diverted from Landfills?

Reflections on Senior Ring Weekend: A Night for Our Wallets to Remember