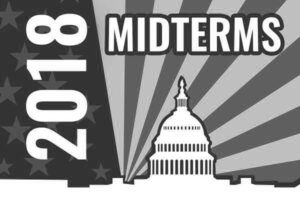 History was made on Tuesday during this year’s midterm election. A record number of women were elected and will be heading to Congress in this new term.

Due to the overwhelming majority of Democrats elected, the party will now take control of the House of Representatives.

It is recorded that over 100 women will be seated in Congress. Up to this point there have never been more than 84 seats held by women in the House and 13 in the Senate.

Congress is not the only place where women took control. In Kansas and Michigan, women took the gubernatorial races, electing Laura Kelly and Gretchen Whitmer, respectively.

Both Kansas and Michigan switched from Republican to Democratic leadership following this election.

In Michigan, women also won Attorney General, Secretary of State, and a seat in the Senate.

The midterm election displayed that the results of many states shocked the country.

The primary election, which occurred in September, helped set the scene for what the midterm election would look like, creating competitive races between Democrats and Republicans.

After a tight race that shifted back and forth until 10 p.m., the Republicans secured the Senate while the Democrats took over the House.

In Alaska, Republican Mike Dunleavy flipped the gubernatorial race, making the state more red than ever before.

Georgia has been the tightest and most high-profile gubernatorial election. Democratic candidate Stacey Abrams was backed by both Barack Obama and Oprah Winfrey. Early Wednesday morning, she trailed Trump-endorsed Republican Brian Kemp, who is currently Georgia’s Secretary of State.

Rhode Island held onto its Democratic trifecta state with Gina Raimondo elected as governor over Republican Allan Fung with 52.7 percent of the vote. Sheldon Whitehouse also won the Senate race with 61.5 percent, and Democrat Peter Neronha swept the Attorney General race with 80.7 percent against Compassion Party candidate Allen Gordan who got 19.3 percent of the vote. Democrat Jorge Elorza also won mayor of the city of Providence.

Other state trifectas were affected as well in Tuesday’s election, with changes in at least 11 states.

With current results, the nation now has 14 Democratic trifectas, which includes Rhode Island, and 22 Republican trifectas.