Pope Francis, Bishop Tobin, and the LGBT+ Community: A Call to Action 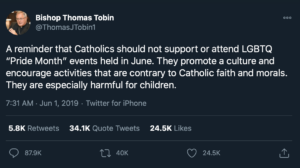 Pope Francis, Bishop Tobin, and the LGBT+ Community: A Call to Action

Pope Francis made history this month with his statement regarding the LGBT+ community in the recently released documentary Francesco. In the documentary, Pope Francis says, “What we have to create is a civil union law. That way they [gay couples] are legally covered.” This statement went viral and grabbed mass public attention given the magnitude of a pope expressing public support for civil union protections for the first time.

Yet, here in Providence, Bishop Thomas Tobin made a completely contradictory statement, saying, “The legitimization of their civil unions, which seek to simulate holy matrimony, is not admissible.” This is a clear indication that Bishop Tobin not only opposes the progressive views held by many in the Church community and leadership, but, in this case, is in direct opposition to the highest authority in the institution.

The conversation regarding the relationship between the Church and LGBT+ individuals has also been present on campus. In the recent town hall held by Father Sicard on Monday, Oct. 5, one of the questions anonymously posed was, “How will PC protect LGBTQIA students especially considering the Church’s views on marriage?”

Both Father Kenneth Sicard, O.P., and Father James Cuddy, O.P., stressed the necessity of respecting every member of our community. Jacqueline Peterson, advisor to the president for diversity, equity, and inclusion, mentioned that the Office of IDEI was working with SHEPHARD to determine strategies to make LGBT+ students feel safe. However, these responses failed to provide any concrete plan or decisive action that the College will take to protect its LGBT+ students.

On homosexuality, the Catechism of the Catholic Church says, “This inclination, which is objectively disordered, constitutes for most of them a trial. They must be accepted with respect, compassion, and sensitivity. Every sign of unjust discrimination in their regard should be avoided.”

Although the Catechism then declares that homosexual marriage is forbidden within the Catholic Church, it does provide a minimal acknowledgement of homosexual peoples within the Church and encourages them to take on a life of chastity. While the pope’s statement of support is not official Church doctrine, this is the first time a pope has been so explicit in presenting a view at odds with the Catholic Church on the rights of LGBT+ people.

The Roman Catholic Diocese of Providence has a history of maintaining an unforgiving stance on gay marriage by its religious authorities, namely Bishop Tobin. During Pride Month in June 2019, Providence received a message of hate that attracted not only national, but also global attention.

This message came from Bishop Tobin in the form of a tweet that stated: “A reminder that Catholics should not support or attend LGBT+ ‘Pride Month’ events held in June. They promote a culture and encourage activities that are contrary to Catholic faith and morals. They are especially harmful for children.”

Although the beginning statement is arguably in line with Catholic doctrine, how Bishop Tobin continued to fill in the 280 characters allowed by Twitter opens the door for misinterpretation and offensive undertones.

Providence College professors from a range of religious and political associations were interviewed in October of 2019 about Bishop Tobin’s statement. They were in complete agreement that the tweet was a mistake. In the words of Father David Stokes, “I think it’s unfortunate when clergy resort to tweets to score theological points. I thought it was lacking in pastoral sensitivity and just plain unnecessary.” Dr. James Keating of the theology department reiterated this idea, remarking, “I thought it was stupid and he shouldn’t have done it. Which I think he thought as well—I think the people around him thought it was ill-advised.”

Both professors shared the same foundational idea: the statement should not have been tweeted because the word limit imposed by Twitter leaves massive space for misinterpretation of ideas. Due to the vague nature of this tweet, professors and students alike had a broad range of reactions and interpretations.

In addition to Fr. Stokes and Dr. Keating, Dr. Despina Prassas of the theology department shared that her initial reaction was, “That’s the question—whether he, as shepherd of his flock, may not understand the commitment of all the members of the Catholic Church here in Rhode Island and is not able to support them.”

As for student reactions, Jolssen Rodriguez ’21 said, “Recognizing a month for our community’s love and pride goes against anyone’s Catholic morals who wears the same glasses as Bishop Tobin, but it does not go against Catholicism itself.”

Regardless of what Bishop Tobin meant when he tweeted this message, he failed in his delivery. Rather than make a legitimate theological claim on the Church’s teaching on marriage, Bishop Tobin’s tweet was deeply hurtful to many within and outside of the Providence community.

Now, how should PC respond to the kind of rhetoric exhibited in Bishop Tobin’s tweet? The College claims to be an accepting campus and in its Notice of Non-Discrimination, states: The College “does not discriminate on the basis of race, color, national and ethnic origin, sex, gender, sexual orientation, gender identity, religion, disability, age, veteran status, or genetic information, in the admin­istration of its education policies, admission policies, scholarship and loan programs, athletic and other College-administered programs, and employment policies.”

The beginning of the College’s Non-Discrimination statement explicitly affirms that PC is accepting of those of various sexual orientations, meaning of members of the LGBT+ community.

However, that same clause goes on to state that “the College reserves the right to take actions designed to ensure and promote its Catholic and Dominican mission.”

This raises the question: to whom should Catholics, specifically Catholics at the College, look for an answer on where the Church stands on homosexuality? It is quite clear from Bishop Tobin’s newest statement, in addition to his tweet, that he has low regard for the LGBT+ community—especially if he deems its activities “harmful to children.”

Fr. Stokes, in response to Bishop Tobin’s disconnect with the pope, stated, “I see the Church as having fragmented to such a degree that it will take decades to recover—and I’m not even sure that it would mean to recover. I’m afraid a faithful laity has been afflicted with a spiritual Stockholm syndrome by an inbred and rancid clericalism.” Given the views that Bishop Tobin holds, which he expressed in his tweet, it is evident that he is contributing to that division within the Catholic Church, especially with his recent statement in response to Pope Francis.

Bishop Tobin’s involvement at PC is written into the Bylaws of Providence College, making it difficult for LGBT+ students to feel accepted by the College, which already struggles with inclusivity as it is. In the bylaws, it is established that one of the powers of the Corporation of the College is:

“To elect members of the Corporation and of the Board of Trustees and when, in its sole discretion required for the good of the College, to remove the President of the College, or any member of the Corporation or of the Board of Trustees, excepting only the Roman Catholic Bishop of the Diocese of Providence (Bishop) and the Provincial of the Province of St. Joseph, Order of Preachers (Provincial).”

This statement establishes that the Bishop of Providence can never be removed from the Board of Trustees or the Corporation. Thus, Dr. Keating is justified in suggesting that “there’s no way on God’s green earth that PC is going to say to the bishop that he isn’t welcomed here because we’re now an accepting campus—that’s not how things work in the Church.”

However, the bylaws also state that a power of the Corporation is: “To adopt and amend these bylaws, at any time and from time to time, in any and every respect not inconsistent with the Charter and all amendments thereto.” Thus, the bylaws of the College do allow for amendments to the bylaws. In fact, the bylaws have been amended 18 times since they first became effective in 1992.

An amendment of PC’s bylaws to remove the clause “excepting only the Roman Catholic Bishop of the Diocese of Providence,” in no way means that the bishop would no longer hold a position in the Corporation or on the Board of Trustees, but it would give the College the power to remove the Bishop of Providence from its Board of Trustees if necessary, a power it has with the president of the College and any other Board member.

With this power, the College could thus remove a bishop, like Bishop Tobin, who, in some of his public comments, fails to consistently show love and respect to LGBT+ people. This is an important part of protecting the LBGT+ community on campus and acknowledging their experiences.

As many in our community have suggested and will continue suggest, the College should take the following actions in order to protect its LGBT+ students:

To the administration of PC, I ask, what is next? Where are we heading from here? You must consider the message you are sending to your LGBT+ students. We are here, and we are paying close attention.

Ray Composting: How Much Waste Have We Diverted from Landfills?

Reflections on Senior Ring Weekend: A Night for Our Wallets to Remember