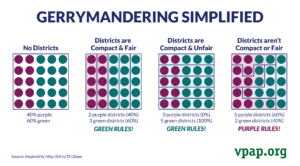 Every year, as Rhode Islanders rush to their voting centers for elections, incumbent politicians’ victory parties have already started. Sipping on celebratory champagne in their plush suburban homes, officials can rest easy knowing that no one can seriously challenge their seats.

Why? Stealing tactics from corrupt bookies and old-school wise guys, politicians have discovered a legal fix that puts point shaving to shame, gerrymandering. Supercomputers and expert analysts have packed friendly voters into incumbents’ districts, eroding any chance of competitive elections.

Carving Republicans and Independents out of their districts, Democrats ensured that 86 percent of State Senate seats and 84 percent of General Assembly seats were blue. Yet only 39.9 percent of Rhode Island voters are registered Democrats!

Unfortunately, partisan gerrymandering infects elections across the United States, and both parties reap the rewards at the expense of the American people. With conservatives and liberals jammed into separate districts, red districts elect the same Republicans and blues elect the same Democrats.

Crushing opposition in laughably uncompetitive districts, incumbents no longer have to truly appeal to their voters. All of this destroys voters’ say in their government, weakens their control over their representatives, and allows Congress to stray from the will of the American people. Do not let corrupt politicians fix American Democracy; we must fight to end gerrymandering.

Again, with voters unable to oust complacent representatives from office, a steady stream of inefficient and wildly unpopular policy has spewed from Capitol Hill. According to CNN, Americans of all political leanings gave Congress a miserable 10 percent approval rating, yet these detested representatives easily win reelection. In fact, polls from Public Policy Polling show that the American public has higher approval ratings of traffic jams, herpes, hemorrhoids, and even colonoscopies!

Luckily, political analysts have crafted the “efficiency gap” test, the “manageable standard” that Justice Kennedy has been waiting for. As the New York Times describes, the “goal of gerrymandering is to force the other side to waste votes.”

For instance, instead of allowing competitive elections across Wisconsin, Republicans packed Democrats into a few districts, where they cast votes that were far “beyond what’s necessary to win a district.” These districts would have been blue without the extra Democrats siphoned into the district, and these “wasted” Democratic votes could have made other district elections more competitive. With Democrats banished to a handful of districts, Republicans won the majority of districts in landslides.

The “efficiency gap” gives a numeric value to this phenomenon. It tallies “all the wasted votes in victory and defeat for both parties” in packed districts, “finds the difference (between the two parties wasted votes)… and divides by the total number of voters.”

In plsin English, this means that we now have a percentage for how gerrymandered a district is. Using this metric, the New York Times measured Republican gerrymandering in Texas, Ohio, New York, Pennsylvania, Michigan, and six other states. On the other side of the aisle, Democrats have officially gerrymandered Maryland, and have created safe seats in Rhode Island.

Armed with a metric that pinpoints gerrymandered districts, the Supreme Court can finally cleanse the United States of its gerrymandering infection. Finally, Gill v. Whitford could return the reigns of governance to the public, allowing them to expunge complacent and unaccountable representatives from the halls of Congress. End the laughingstock elections; return power to the American voter. To quote Arnold Schwarzenegger, Justice Kennedy, “it’s time to terminate gerrymandering!”