Take a Break: Watch A Capella

By the end of the semester, stress levels and workloads are especially high for students, professors, and faculty alike. Remembering to take a moment to relax and enjoy the holiday season is often difficult, but one end-of-the-semester event always seems to make it easier: Providence College’s very own A cappella show.

Not only did PC’s three A cappella groups deliver high-energy musical performances that could get any PC student singing and clapping along, but their diverse and unexpected set list really took the audience by storm.

First and foremost, PC’s all-male group, Special Guest, completely turned heads with their closing song. I do not think anyone in the crowd was expecting to hear a song from Moana that night, let alone a funky mash-up of “How Far I’ll Go” and “You’re Welcome,” and other songs performed with the spunk and passion that only a Disney soundtrack can evoke.

Strictly Speaking also came in hot with an attention-grabbing cover of one of Elton John’s classics, “Bennie and the Jets,” and no one could ignore the energy and pure clapping power of Anaclastic’s version of “Thunder” by Imagine Dragons.

Although the end-of-semester chaos has fallen upon PC, our A cappella groups’ performances remind us to always take a step back from the stress this time of year, sit down, unwind, and enjoy the talent our students have to offer through their unique and passionate performances. 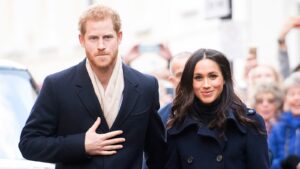 Wedding bells are ringing in England.  On Nov. 27, Prince Harry announced his engagement to Meghan Markle.  After meeting on a blind date and dating for a year and a half, the couple is set to be married in spring 2018.  This engagement proves to be unprecedented for a number of reasons. Markle, who starred in the drama series Suits, will be the first American in recent history, as well as the first person who identifies as biracial, to marry into the royal family. Markle’s mother is black and her father is white.

While this marriage will prove to be historic, there has been some backlash. In their first interview following the engagement, Markle described negative media regarding her race to be “disheartening.”  In a statement, Prince Harry spoke out against such media coverage and denounced “the racial undertones of comment pieces; and the outright sexism and racism of social media trolls and web article comments.”

Despite these negative responses, the engagement has been largely praised.  Many see the relationship as being representative of a more modern and progressive monarchy.  In their post- engagement interview, both Prince Harry and his fiancée spoke of their plans to work for social justice.  Prince Harry and Meghan Markle’s engagement should be celebrated not only because of the love they share, but for its potential effect on a more tolerant world.

Muslims Are Not the Problem

When the leader of the country spreads messages about hate, what hope is there for everyone else? President Trump’s inflammatory retweets of anti-Muslim videos only enable those who harbor the same hatred for anyone who might be considered an outsider and wait for an opportunity to express it.

Throughout his campaign and presidency, Trump has proven to be particularly concerned with national security and the threat of terrorism. However, there is a definitive line between making border protection a high priority and condemning an entire group of people simply because they do not reside within those borders.

Instead of isolating terrorists as the real perpetrators, Trump suggests that a whole religion is at fault. By retweeting videos of a Muslim boy being violent against a boy with crutches, he endorses the views of a far-right and radical nationalist group.

Categorizing all Muslims together is unfair because it suggests that over one billion people worldwide are villainous solely because of their religion. Yet the same logic does not seem to apply nearly as much with perpetrators of any other religion.

Religion should not have to be the primary determinant of an individual’s character, nor should it be grounds for incriminating a consolidated group of people. Muslims are more than their religion, and the ones who pose a threat are in the minority.