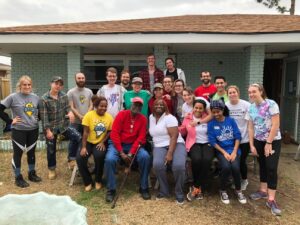 Over Winter break, 14 Providence College students traveled to New Orleans, Louisiana (NOLA), on the NOLA Immersion trip. The service-immersion program is sponsored by Campus Ministry. The purpose of the program is said to be “to cultivate, through active service and the lens of faith, a sense of solidarity with women and men living on the margins.”

The trip to New Orleans took place from Wednesday, January 3 to Wednesday, January 10. While there, the PC students participated in service activities, community bonding, and site-seeing. During the week, students split into three groups and worked with different organizations such as the St. Bernard Project, the Harry Tompson Center, Greenlight New Orleans, and the Lower Ninth Ward Village.

To prepare for the trip, during the fall semester, students met weekly to learn more about New Orleans, Hurricane Katrina, and the other people going on the trip. Students studied different aspects of New Orleans culture including food, art, and music.

PC student Tom Nee ’18, who took part in the NOLA Immersion, said, “New Orleans is like its own country. It’s like nothing I’ve ever seen before. There are places that look like Katrina just happened, but it is filled with such hope from the energy of the people.”

Describing the atmosphere of New Orleans, Nee told a story of an art studio he visited while on the trip. A piece of art in the studio, which was full of graffiti art, had a prominent quote, “Baptized when the levee broke.” Nee stated, “To me, that art and quote described the community of New Orleans. There is a personality of perseverance and hope.”

Nee’s favorite part of the trip was a mass at St. Joan of Arc Church. “It was a Catholic mass deeply entrenched in the African American Gospel community,” said Nee. He noted how welcoming everyone was and how they were charismatic in their faith.

Rob Lesch ’20 said, “my favorite part of the trip was interacting with the people of New Orleans. They are so kind, friendly, and inviting in every possible way. They always cared to introduce themselves and learn your name, even if you were never going to see them again.” Lesch said that when working with one of the organizations they changed old light bulbs in people’s homes to energy efficient ones. He noted that those whose homes they went to were so inviting and loving.

“Immersing yourself in the culture allows you to learn about how to truly act as a community,” said Josh Santos ’20. “The people there welcome you into their community with such hospitality. It is amazing to see the vibrant community that remains despite the hardships faced.”

Santos explained that by rotating the days in which they visited service sites, they were able to meet so many different people and hear their unique stories. He emphasized the importance of keeping your mind and heart open and not being afraid to get out of your comfort zone.

Reflecting on his experience in New Orleans, Lesch said, “We talked to so many people and learned so many different things about them, their culture, and their problems. I left New Orleans with a new mindset that there is a lot of change that is needed in this world, but that there are a lot of people willing to dedicate their lives to solve them.”

One thought on “Featured Friars: Student Leaders in NOLA”

The Race for Speaker of the House