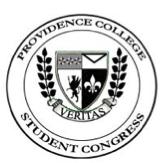 Student Congress held its second general meeting of the year on Tuesday, January 30.  The congress began the meeting by hearing from a guest speaker, Jackie Peterson.  Peterson is a transitional consultant at Providence College and is focused on “assessing the overall structure” of the College regarding diversity and how to best improve diversity on campus. She also spoke of her support for the search committee which is currently heading the hiring process for the new Vice President of Diversity and Inclusion. Peterson was the former vice president of student affairs at the College of the Holy Cross and has held multiple high-level positions at other colleges and universities. She is hoping to use her years of experience as well as suggestions from the members of Student Congress to help the College take “an important next step.”

Peterson asked those at the meeting who had attended Dr. Bernice A. King’s convocation speech to remember if anything she said could be pertinent to helping improve Providence College’s diversity and community. The idea of harmony arose as one representative attested to the need for peace and understanding of others. Peterson agreed with this, adding that we need to have an open dialogue with others and recognize the humanity of all people. Another member of congress invoked a powerful quote of Dr. Martin Luther King, Jr., saying, “It’s not that you want to win, it’s that you want to win them over.” The member believed that it needed to be pointed out that sometimes it seems that the school would like to change perceptions, but is not necessarily have an open and accepting dialogue. The member challenged the school to have a greater interest in actually affecting change rather than making it seem like there has been change.

From there Peterson moved on to ask the students of congress what exactly they would suggest or say to the new person that will be hired as vice president of diversity and inclusion.  One question involved the congress itself, with an elected member asking what more the congress can do to attempt to affect change on campus.  A piece that was introduced last semester had offered to have congress reach out to other groups on campus in order to promote diversity, but gained little traction as many did not see it as the Congress’s duty or thought it would infringe on the work other groups do.

Peterson responded by stating that although it may not be directly expressed in our mission statement, one of the most important things on a campus is to have a strong foundational organization that is as diverse and inclusive as possible.  A member of the congress also suggested that the College should do more to make students realize their voice has real power to effect change on this campus.  Many students are apathetic, and if the school focused more on building connections more people would recognize their voice as their power.

From there, the conversation turned to the necessity for there to be more people of color both in the student body as well as the faculty. According to one student, it can be hard for a person of color to feel engaged in a class where they can feel alone surrounded by all white students and teachers. Not only that, but members also wished for there to be more opportunities for women and members of the LGBTQ+ to feel a member of the community on campus. As one student pointed out, as one enters campus it feels as if it flaunts its diversity in signs and photos, but walking around campus one realizes its lack of credibility.

From there, students suggested the administration take a closer look at its scholarship and grant allocations saying the College should be willing to sacrifice some profit for the good of the College as a whole.  If PC can build stronger relationships with more diverse high schools as well as offering financial aid, the school can seem more like home for many students that are already here.

Finally, some students wished to see changes to the diversity requirement. Some classes that fulfill the requirement do not seem to actually teach about diversity, and if the College is committed to creating a dialogue that’s a place to start educating students.  With that, Peterson thanked the congress for giving the time and promised to look into many of these issues as well as challenging the congress to effect change.  The Student Congress thanked Peterson for taking the time to have a dialogue.

The Excel Club was scheduled to be voted on first, but was delayed until after the vote for the Music Production Club.

The Music Production Club attested to their opportunities in a wide field of musical styles.  Many members spoke to the good aspects of this idea, especially because our school does not have many musical opportunities.  One question arose as to funding, but the presenter of the club requested no funding at the present time.  With this, the club was passed with one nay vote.  Congrats to all involved and good luck.

The question arose again as to the Excel Club, and many students spoke to its necessity on campus.  One question arose if the club had attempted to be a part of the Providence College School of Business, but the presenters of the club wanted to be able to extend help to students of all majors in order to utilize excel. Many defended this aspect of the club, and the piece was put to a vote.  It passed with one nay vote.

One piece of legislation regarding a change to congress elections for juniors going abroad was tabled for a week so the presenters could refine some of the details.

Finally, the allocations for the upcoming semester were discussed, and will be worked on extensively by the club in the coming days.  It will be voted on soon in order to get clubs the funding they need.