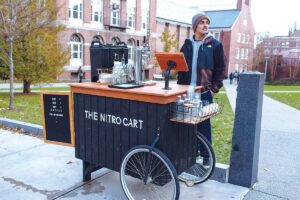 The Nitro Cart, a local Rhode Island coffee company, began setting up shop across the street from the Huxley Avenue gate on Eaton Street, from 11 a.m. to 3 p.m. Monday through Friday. The cart had originally visited campus on Sept. 6, but began regular hours this week.

Zach Fin, one of the workers handling the cart, got the chance to talk about some of the history behind the company and its origins.

“The Nitro Cart started about three years ago,” said Fin. “The owners Audrey and Sam basically learned what nitro coffee was and they just loved it. They wanted to put it on a cart because they thought it would be really cool to bring it into the streets.”

Nitro Cart coffee can not only be bought from the carts themselves but also in local eateries across the state. “They ended up installing taps in places like PVDonuts, Rebelle, and Wildflour, so it became a really big thing for the community,” Fin explained.

Fin explained that they work with a local roaster to create a signature blend, and they source their beans from many different places around the world, giving it a unique flavor. Fin also explained, “The nitrogen gives it a very creamy texture; it takes away a lot of the bitterness and acidity.”

Taylor Wedge ’21 and Ali Troup ’21 were there checking out the spot last Friday. “Well I’ve had nitrogen coffee before, but this has a lot more options using the nitrogen coffee,” said Wedge.

Both Wedge and Troup said that they enjoyed the coffee and would definitely recommend The Nitro Cart due to its high quality and variety of flavors.

The Nitro Cart got the idea to set up across from the campus through Rachel Rockwell ’20. Rockwell, although a native of Cleveland, Ohio, runs the Instagram account @eatlocalrhodeisland.

Rockwell is well acquainted with Audrey Finocchiaro, one of the founders of The Nitro Cart.

“I was just trying to get them to come on campus,” Rockwell explained.

Although her Instagram has a lot of followers, not many people know that she is the real-life person behind it.

“I didn’t actually reach out to them, to promote them to come on campus,” Rockwell mentioned, “I was just sitting in Nitro one day, I was wearing a Providence College shirt, and one of the workers that works at the bar came up to me.”

Rockwell is a frequent patron of The Nitro Bar, one of The Nitro Cart’s home locations, which is located in a bike shop in Providence.

“It’s like a coffee bar, but the owner of Dash Bicycle Shop, on Broadway, he really likes their coffee, so he incorporated them into a bar because they were looking for a location,” she added.

In addition to their coffee, Rockwell is also a fan of The Nitro Cart’s atmosphere and resolution to create a cleaner environment. All the carts serve paper straws and eco-friendly plastic cups.

The Nitro Cart is a local growing business, opening locationsthroughoutConnecticut,Massachusetts, and Rhode Island. For a full list of places that serve its nitrogen coffee on tap, head to www.thenitrocart.com.