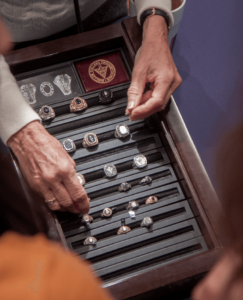 The class of 2020 officially kicked off their road to graduation on Thursday, October 11 in ’64 Hall. The official class ring was unveiled and the process to graduation was also elaborated upon.

The event will eventually culminate to what is the highlight of next fall for the class of 2020, Senior Ring Weekend, which is a weekend full of a formal dance, dinner, and a Sunday mass where the class will receive their rings.

Rich Custodio ’20, a member of the SRW committee and in charge of Thursday’s event, said he is eager to begin the process for both himself as well as his entire class.

Custodio said it has been a lengthy and busy process, but he is thrilled with how the event turned out and with how the class ring for 2020 looks.

Custodio said that both the event and next year’s SRW means a lot to him because of the time he has spent with his classmates.

“It’s like, ‘Wow, we have known each other for almost four years, and this is it,’” Custodio said.

The importance of this event, and the weekend that will follow next year, helps define the Providence College experience, according to Custodio.

“It’s a key part of what it means to go to Providence College,” Custodio said.

The class of 2020 will continue its year by ordering rings, taking the GRE, and ultimately preparing for the SRW and graduation in May of 2020.

Katie Spitalnic ’20, a transfer student, member of the PC pep band, and all-around active student, said she is eager to begin her time at PC.

In her excitement for her next two years here, she, like many other members of the class of ’20 is planning on going to SRW and is looking forward to the experience of getting a ring and the jam packed weekend that comes with.

With less than a year and a half to go, juniors are beginning to close the chapter of college and opening new ones such as grad school and jobs.

The importance of looking back on the four years spent at PC is both sentimental and rewarding.