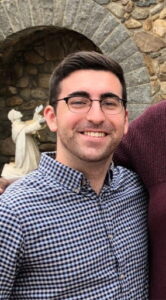 During the past three years through his involvement on campus, Matt Lussier ’22 truly has fully immersed himself in the Providence College community and left a profound impact. Originally from Ludlow, MA, Lussier took advantage of the wide array of majors and minors and the liberal arts curriculum within the college and decided to declare  a Political Science and Spanish double major. When asked about his decision, Lussier says “I’ve always had a love for politics and government, and I am passionate about the language and the cultures of Spanish-speaking countries.” In addition to his studies, he is the president of Student Congress, an Orientation Leader, an avid member of the Pre-Law Society, and has played almost every intramural that PC offers.

Lussier’s involvement on campus in many different capacities translates into a deep desire to make a difference and leave a lasting impact on his fellow students. As President of one of the largest student organizations on campus, Student Congress, Lussier says he is excited that it provides  him the platform to do this and to effectively advocate for students.

Along with the rest of the executive board, Lussier says that Student Congress has a heterogeneity of goals and initiatives this year. In addition to a focus on rebuilding and fostering a sense of community that was extremely difficult to maintain virtually during the COVID-19 pandemic last year, Lussier says that Congress is focused on Institutional Diversity, Equity, and Inclusion initiatives as well as the more extensive implementation of environmentally friendly practices in construction and renovation projects on campus. When asked about his favorite part about being on Student Congress the last three years, Lussier expressed a deep sense of gratitude for the lifelong friends he has made from the club as well as the connections he has made through collaboration with other clubs on campus.

In the wake of two semesters plagued by COVID-19 restrictions, Lussier conveyed his enthusiasm for the upcoming fall semester, and his hope for the return to “a semi-normal college experience.” Yet, he looks back on last year with a sense of pride; “Even during the peak of COVID-19 last year,” he says, “our campus had one of our most active years of advocacy in recent memory, if ever, and I hope to build upon that.” He is excited to reconnect with old friends, make new ones, and attend basketball, hockey, and soccer games. “During orientation, a lot of OLs spoke about how it was finally starting to seem like Friartown is back, and that is an amazing feeling” Lussier says.

Upon reflecting on his past three years as a member of the Friar Family, Lussier found it nearly impossible to pick a favorite Providence College memory. He looks fondly on the connections he has made on campus, and on his Development of Western Civilization Experience. “My professors were amazing and I am still friends with everyone in the class today.”

In the future, Lussier is planning on attending law school and becoming an attorney. His leadership skills, involvement in extracurriculars on campus, and close attention to his studies all set him up for success after graduation, and the impact he will leave on the College’s campus is truly remarkable.