The Arrival on Europa 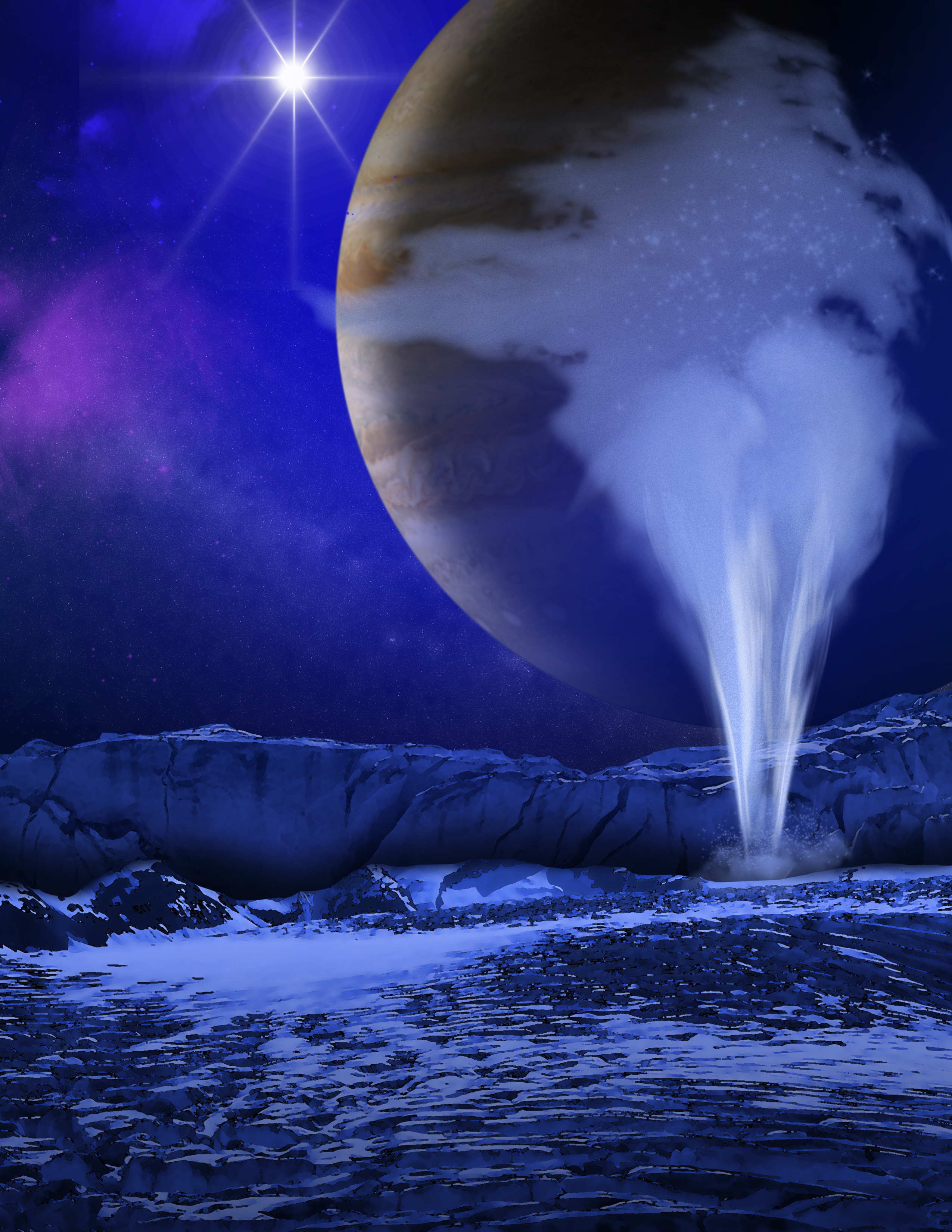 Another space race had begun. It was not with the Russians this time. Instead, it was against China. Predictable. One world power against another. We probably could have foreseen this. After being shelved decades prior, Human Outer Planets Exploration, also known by its corny acronym, HOPE, was no longer something purely conceptualized. It was now a reality, with a slight change in destination. Instead of traveling to Callisto, our actual safest bet, we were traveling to Europa.

NASA had finally received the proper funding they needed, and a small crew of six were plopped onto a ship, isolated deep in the fabrics of nothing but the dark abyss, traveling to Europa, one of the Galilean moons that is always rumored in the Popular Science written articles to be habitable for human life. A moon named after one of Zeus’ bazillion mistresses.

It would take six full years to get to Europa, and another six years back to Earth—a 12 year road trip. The whole purpose of our journey was simply to explore, and be the first to reach uncharted territory.

We already established ourselves to be sung about in future textbooks by going the furthest from Earth than any human in history, but that was not enough. We had to push the envelope one more time. One of us had to get out of the ship, and Frank was our guy.  He was about to go on a moon with a temperature of -200 degree Celsius. Antarctica is a lot warmer than that. Like a lot warmer.

Also, Europa has enough radiation suitable for your run-of-the-mill, post-nuclear apocalypse film, though its sister, Callisto, has the least radiation out of all Jupiter’s moons. We wondered why we even chose Europa, a moon clearly hostile for human life, but I realized our sole endeavor was to triumph in this space race.

To top everything off, we lost connection to Earth four months ago. We tried everything to get communication back, from digging like dogs through the wiring in the walls to dissecting computers delicately with tweezers, but all we received was radio silence. Considering the advancement in technology, and the importance of the mission, we thought NASA would provide a solution from their end, but no. We got nothing.

Since at the time, we were four months away from Europa, there was no way we were going to stop and steer our way back home. We did not want to waste a total of 12 years of space travel. We had to reach our destination, and eventually we found ourselves parked in a spacecraft on the jagged surface of Europa, six years away from human civilization.

Aaron, the crew’s pilot, would always joke that a Chinese flag would be planted there when we arrived, much to the dismay of the perpetually serious Thomas and Patrick, who were navigator and commander, respectively. Brooke and I, the crew’s technicians, would lighten up and laugh, but ultimately we could not fully immerse ourselves in humor.

Instead, we shared the same sense of unease and worry. Either my nerves or the freeze-dried stuff we were subsisting on with its endless expiration date made my stomach feel hollow. We arrived, and we had to make sure protocol, procedures, etc. were all set. In fact, we were nearly four hundred million miles from Earth; or in other words, four hundred million miles from any source of help.

However, despite the stress and tension, we still could not help but soak in our surroundings. It was like being in one of those stunning, space themed screen-savers, or watching a sci-fi film with topnotch, realistic CGI on a mountainous screen. Seeing Jupiter, so massive, so close to little Europa, was something so indescribable that words did not do any justice.

Back on Earth, we have all seen that strawberry moon that appears around June, and we easily got astonished by that, but our view of Jupiter surpassed that coolness by millions. The scariest fact was that Jupiter’s beauty mark, that colossal hurricanic spot, could easily fit two Earth sized planets. One Earth alone can comfortably fit in it like a baseball in a glove and here we were, compacted like some old sardines, getting the full perfect view of it, between swallowed by Jupiter’s magnitude. When confronted by such immensity, it’s like being an ant crawling on the sidewalk in front of the Empire State Building.

It was showtime. Frank was fully equipped; his suit almost cumbersome due to all its gadgets and padding. He was so rigid and compressed by the EMU that he looked like the Michelin Man. But he was ready…I think. His ever-so quiet and mysterious demeanor was haunting. He stood there stoic like a statue, waiting to be released from the ship.

Brooke placed her hand on the door latch, a concerned look in her doe eyes directed towards Frank, easily conveying the two words “Good luck.” Thomas placed his hands on Frank’s padded shoulders, another expression of good luck. Patrick was adjusting Frank’s suit like a mom adjusting a kid’s winter coat. And Aaron just had to shout out, “break a leg!”

Frank and I exchanged looks. I smiled and wished him luck. Frank was still quiet, but he sheepishly smiled back. He held his bulky helmet in his hands like a pumpkin, took a quick gaze at it before he plopped it on his head. Only our own reflections were seen, our anxious faces, almost on par with Munch’s Scream painting. Frank’s face could not be seen beneath his murky helmet.

Brooke released the latch and Frank, in his clunky suit, went through the narrow, cramped hallway, shutting the door that separated us from him, and opened another one to free himself from the ship. For a moment, my anxiety almost switched to jealousy, seeing Frank released from the ship while we looked on like caged animals, but then again, given the weight of the current situation, I was glad that all I got to do was watch.

He was out. Quickly, we all glided towards the monitor to watch Frank take the Armstrong step out of the ship. He raised his right foot and lodged it onto the icy, eerily pristine, ground before the amazement could hit us, and he did the same with his left foot. His leap was, of course, slightly inelegant and clumsy, but he slowly familiarized himself to the gravity, making little leaps and jumps to get himself around. The cabin, though brimming with apprehension, roared with cheers.

Frank hopped around for a little, but still was silent. I could not envision the awe he must had been experiencing, the surreal sensation of treading on the raw, unexplored grounds of Europa. It was like his whole life was building up for this moment, to be the first man to lay a foot on Europa. In the monitor, he started to camouflage himself along the icy rocks; his body slowly fading as he walked away like a cowboy in an old, black and white, gritty western.

The cabin was silent now. I could almost hear the glimmer of sweat dripping from everyone’s forehead, in addition to the sounds of our hearts pounding so heavily. We had the dial on max. Thomas shot me a slight grimace, and Patrick had his shaky hand on the radio, ready to adjust it, when the awaited beep came through. Everyone’s muscles froze, with our ears giving full attention. We hovered over the radio like a child hovering over an unopened present. The already mousey Frank was almost voiceless. My gut clenched. His response was nothing more than two repeated sentences.

Brooke, hastily plucking the mouthpiece of her headset, immediately started to shout, “What?! What is it!?”

It Wasn’t a Dream

The following piece includes a discussion of sexual assault and the subsquent mental and emotional impact it may have on survivors. Discretion is advised.  by Connor Zimmerman ’20 I stand there in the corner absorbing everything around me. The…

by Erin Venuti ’20 Her last Christmas season here. The first one was exciting. Although they’d had an entire Thanksgiving break to get ready, it seemed that the campus had transformed itself overnight. Each day, Kate discovered something new—another Christmas…

How I Found Your Christmas Gift

by Sarah McLaughlin ’23 I found myself shopping for you in Barnes and Noble, of all places. I never realized a bookstore could be such a shit show, but hey, I guess it’s Christmas Eve. I’ve never been much of…

Snowed in for the Holidays

by Sam Pellman ’20 “I’ll never make it home!” she sighed. The schedule just changed from a two-hour delay to now four. The snow was falling hard at home. She looked at the TVs where the runways in NY were…

Established in 1935, The Cowl is Providence College’s only student-run newspaper. It boasts six sections and approximately 100 members. Issues are distributed every Thursday evening to roughly 50 locations on and off-campus. High volume areas include the Slavin Center, Phillips Memorial Library, and the Ruane Center.

Need assistance with this form?