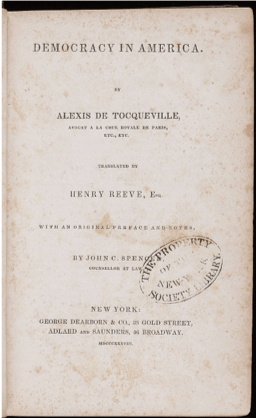 In 1831, a young Frenchman interested in sociology and political theory traveled to the United States with his companion.  De Tocqueville’s main purpose was to study American prisons, but in that endeavor, he spent months crisscrossing the U.S. gathering information about its government and economy, its inhabitants and their social mores, and many other features of American life. Democracy in America was published in 1835, and it has become one of the foundational works for studies of American culture and politics.

Although he traveled during the Age of Jackson, his analysis is remarkably prescient, particularly when he discusses the long-term consequences of a racialized slavery.  He argues, for example, that among the most formidable of all the ills threatening the future existence of the Union is the presence of black slaves, noting the “natural prejudice which prompts me to despise whomsoever has been their inferior long after he has become their equal” (349).  In one memorable section, he travels by steamboat down the Ohio River, separating free Ohio from slave Kentucky.  The stark cultural differences he notes on the two sides of the river, including an indolent southern white population benefitting from the toil of slave laborers, contrasts with the industry and energy he finds in the free state.  This book, written in a lively and engaging style, is a must read for anyone interested both in the development of American institutions and the lingering issues of race and inequality.

American Must-Reads: The Things They Carried

When Ken Burns and Lynn Novick aired their 10-part series The Vietnam War in late 2017, many Americans paused in a moment of national self-reflection.  The telev

ision series has also sparked interest among Americans who were born after the war ended and who want to know more about the experiences in Vietnam and its ongoing significance in American memory.  Why were American soldiers there?  What did it mean for the Americans and Vietnamese who fought? What are the legacies of the war?

The Things They Carried is one of the best contemporary works about the war experience, written by Tim O’Brien, who himself served in the 23rd Infantry Division. The work is a collection of short stories, narrated by O’Brien and linked together by the common experiences of the soldiers in his platoon.  It is a modernist work, circling back repeatedly and enabling readers to view the same event from a multiplicity of perspectives.

O’Brien asks, “How to Tell a True War Story?” The central actors in the book become familiar, and the readers believe the stories that have been told despite O’Brien’s disclaimers that they are not true.  Students in my classes who have read this text believe the authentic voices in the novel and they have indirectly experienced war through its characters. It is powerful and compelling, funny and chilling.  Ultimately, the real truth lies somewhere between the truth of the story and the audience who seeks it.

Podcasting: A Rising Player in the Entertainment Market

Will Ferrell Reprises Role in The Ron Burgundy Podcast

The Friar Boys Take On Gravity

Chuckleheadz Discuss The Most Important Thing In The World