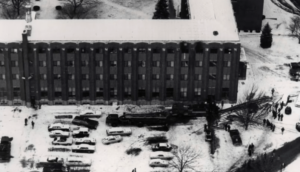 This Wednesday, December 13 will mark the 40th anniversary of the Aquinas Fire that took place in 1977, and like every year since the tragedy, Providence College will be holding a memorial mass that Wednesday at 4:30 p.m.

The fire took the lives of 10 women living on the fourth floor of Aquinas Hall.

“There was an over-whelming sense of sadness and disbelief as to what had happened. It was so horrific,” said Jacqueline MacKay, director of Parent Programs at PC, who at the time of the fire was the only student counselor on campus. “People were comforting one another and I can still remember feeling a tremendous sense of helplessness.”

Although the tragedy occurred almost half a decade ago, multiple members of the PC community lived through the night like MacKay, including Father Brian Shanley, O.P., who was a student at the time.

“I remember the night vividly, and I remember the incredible sadness that just descended on the campus,” said Fr. Shanley in Promise of Providence, the centennial video created last year by Mike Leonard ’70 & ’00Hon. “I remember the next day they canceled classes and brought us to Alumni, and Fr. Peterson said that mass and preached, and I don’t remember what he said, but I remember sitting there and thinking, ‘somehow we’re going to get through this.’”

MacKay explained a mass has been said every year on the anniversary of the fire, and 10 roses are placed inside St. Dominic Chapel—one for each life lost.

“The College community came together on so many different levels to support one another,” said MacKay. “When something like this happens it is natural for people to feel a terrible sense of helplessness.”

MacKay explained her role as a counselor during the aftermath of the tragedy, and as it was 40 years ago, there was not a lot of literature on grief and loss, but appreciated the support she received from the community. “I remember very fondly a group of student leaders who reached out to me in very special ways,” she recalled. “They drove me to the hospital, took me to wakes, even cooked me dinner at one point.  I will never forget their kindness to me.”

The fire took place during the reading period before final exams. Exams were postponed to after winter break after the College was closed for a month.

According to a New York Times article published in 1977 and from conversations with alumni who lived through the event, Aquinas Hall was able to pass an annual fire inspection that September, even though it lacked features such as sprinklers and fire escapes because it was built under prior codes and had been upgraded since. The fire resulted in multiple national headlines and saw many buildings across the country upgrade their fire codes.

MacKay explained that Fr. Peterson, the College’s president at the time, moved into the dormitory and lived there for a year after the fire. “He provided so much love and care to the students living there,” she said. “His presence in that hall was comforting to all members of the college community.”

“I truly believe that our faith, our Dominican presence, Fr.  Peterson our president, and so  many more  are  what got us through a traumatic and painful time,” said MacKay. “The fire is part of the history of the College and has had a profound effect on so many lives, in so many ways.”

“When we remember this tragedy we offer our prayers to those souls who we are still united with, along with their family and friends who are also united with,” Fr. Verner said. “Many times throughout the years, I think about the lives we lost and as the anniversary approaches I say  a special prayer for their families,” MacKay said. “There are no words to describe my feelings towards a community that came together to love and to heal.”

All members of the campus community are welcomed to attend the memorial mass on Wednesday, December 13 at 4:30 p.m. in St. Dominic Chapel.

Podcasting: A Rising Player in the Entertainment Market

Will Ferrell Reprises Role in The Ron Burgundy Podcast