Bursting the PC Bubble: A Temporary End to the Government Shutdown: Will it Last? 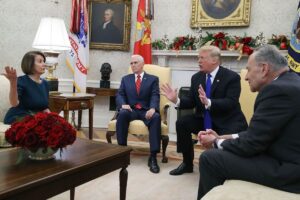 For the 35 days the government was shutdown, there seemed to be no end in sight. However, in a surprising turn of events, it was announced on Jan. 25 that the government would be reopening—sort of.

Last Friday, President Trump signed a bill that would temporarily reopen the federal government for three weeks, beginning on Jan. 28.

The recent government shutdown, which has been the longest in U.S. history, began on Dec. 22, after Congress failed to approve a budget including funds for the proposed border wall. The wall has long been a priority for President Trump.

Ever since announcing his election campaign in 2015, he has been adamant about building a wall along the U.S.-Mexico border to prevent people from illegally entering the country. The wall is part of Trump’s solution to strengthen national border security.

The need for immigration reform is an issue acknowledged by both parties, but for as long as Trump has been emphasizing a wall, many Democrats have avidly opposed it.

In addition to pointing out flaws in the actual construction and funding, many of them oppose the wall for what it represents. They argue that a physical barrier closing off entrance to the U.S. goes against the ideals of America, a sentiment House Speaker Nancy Pelosi has echoed frequently, calling it “immoral.”

The temporary reopening comes on the heels of rising frustration among the American people. One of the biggest criticisms of the shutdown was that the 800,000 federal workers were not receiving their paychecks, including some employees working in essential agencies who still had to report to work.

Although people will be compensated when the government opens again, it still put a financial strain on employees who live paycheck to paycheck.

Both sides cited this as their motive to agree to the temporary reopening: on Twitter, Speaker Pelosi wrote that it was “for America’s families & small businesses, as well as ensure federal workers finally receive the pay they deserve;” President Trump tweeted that “it was taking care of millions of people who were getting badly hurt by the Shutdown.”

Although the shutdown was initially due to disagreement over the national border security budget, the actual policy does not seem to be the issue anymore.

It has turned into a standoff between the President and Congress, ultimately symbolizing a test of powers, and reluctance to concede. Both sides have stood firm in their positions.

Trump has repeatedly noted that he will not take less than a $5.7 billion budget for the wall; likewise, Congress has refused the President’s proposed compromise, which included temporary protection for Deferred Action for Childhood Arrivals (DACA) recipients. These uncompromising stances will make negotiations difficult, because, as Trump commented on Twitter, “both parties [are] very dug in.”

While the government is currently reopened, this is by no means a permanent solution.

The temporary nature of the agreement means that the government will have three weeks to resolve the budget. If no solution is reached, the President could declare a national emergency or the government could shut down again.

President Trump has expressed his willingness to take either of these routes. The countdown is on until Feb. 15, and we will have to wait and see if a resolution can be reached before time is up.

Fighting in the Federal Government Continues: An Overview of the Government Shutdown 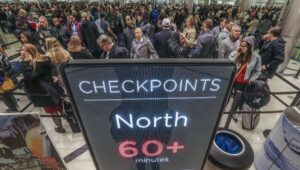 This past Saturday, January 11, marked the third week since President Trump’s refusal to sign a spending bill negotiated by Republicans and Democrats that would continue current border-security funding without the construction of a border wall on the United State’s southern border.Currently, this is the longest-lasting government shutdown in United States history.

The necessity for a border wall to strengthen domestic security and crack down on illegal immigration became a staple issue during Trump’s presidential campaign.

Now that he is in office, Trump has directed his attention towards making this promise a reality, one which would set the government back a proposed $5.7 billion.

Despite stating initial claims that the Mexican government “would make a one-time payment of $5 to $10 billion” to pay for the wall’s construction, Trump has since gone back on these words, stating, “Obviously, I never said this, and I never meant that they’re gonna write out a check, I said they’re going to pay for it.”

Exactly just how Mexico would pay for the wall without an upfront payment seemed like a contradiction until President Trump elaborated on his explanation, detailing how the U.S. government would receive funding through the United States–Mexico–Canada Agreement (USMCA). The agreement itself is a signed free-trade agreement amongst the three nations, however it has yet to be ratified by them.

Despite this nebulous solution to possible financial roadblocks that would arise, President Trump remained unsatisfied with Congress’ apparent indifference to “large scale criminal and drug inflow” across the border, prompting him to declare that the task of constructing his barrier would fall upon the United States military.

To Trump’s displeasure, the proposed funding plans for such an undertaking encountered fierce resistance by House Democrats who were desperate to stall any progress to the wall’s construction. They did, however, reach across the aisle to negotiate on several key budgeting issues that would help to prevent a government shutdown.

Instead, Trump chose to stick to his guns by reiterating his ability to shut down the government should Congress not comply with his demands of $5.7 billion for the wall. Efforts by leaders in both the Senate and House of Representatives attempted to write up a new spending bill, but had no success.

The shutdown of the United States government has directly impacted the lives of some 400,000 non-critical employees belonging to nine federal agencies.

Notable departments that are affected by the shutdown include the Department of Education, the Department of the Interior (including national parks), the Environmental Protection Agency (EPA), and the Food and Drug Administration (FDA).

Trump has publicly stated that he will keep the government shutdown until his demands have been met, going so far as to threaten calling a state of national emergency should the shutdown exceed several months or even years.

Until a compromise between the two combatants can be reached, the men and women employed in these agencies will continue to patiently sit on the sidelines without pay as the winter of 2019 ushers in a new “cold war” between the executive and legislative branches in Washington, D.C.

The Elephant in the Room: Americans Have Spoken