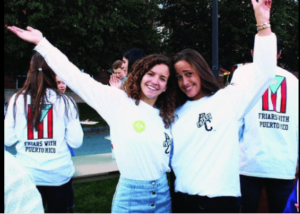 Whether it be fundraisers, charity donations, natural disaster aids, or more, Providence College’s new on-campus club has got you covered.

The idea for the club surged last September when Hurricane Maria struck Puerto Rico, the home of the founding members, leaving country-wide devastation: 100 percent of the island was without power and millions of homes were destroyed.

Seeing how their loved ones and beloved island was suffering due to loss of communication and shortage of food, they decided that even though they were not in Puerto Rico, they could still help and make a difference.

“After the hurricane hit Puerto Rico we decided that we wanted to do something to help everyone out back in the island,” Maria Santos stated.

The four organized a fundraiser that was held on Smith Lawn on Sept. 28 to aid in the hurricane relief. They organized a band and also provided local Puerto Rican food.

The club is not just limited to specific disaster aids; it hopes to cover everything from poverty, to education, to disaster relief, and many more.

If approved by the council, the first activity the club will hold is called Operation Christmas Child.

The club’s goal is to get donations from students, including toys, clothes, school supplies, and other basic necessities. They will have a workshop later that month where people can wrap the donated gifts. The wrapped gifts will then be shipped off to different countries where children tend not to get Christmas presents.

They also want to hold smaller fundraisers, like cookie and grilled cheese runs, to help with other causes such as the victims of Hurricane Florence and other natural disasters.

“Basically, it’s planning different events to raise funds and create awareness for different causes that are important to us and other members of Providence College,” added Adriana Santos.

“I think the club will be a success because we know that everyone here has something they would like to spread awareness or help out and we think this is the perfect club for it,” said Maria Santos.

The founders are hopeful that the club will be able to find endorsements easily, as they will be working with PC faculty, staff, and students directly.

“Some of the values ​​that a Catholic school has taught us is service to others. A club that is dedicated to helping the ones in need which is basically what Providence College stands for,” stated Bauermeister.

“Any contribution, no matter how big or small is accepted.Change starts with you and with all of us joining together to make a difference,” said Rexach.

For anyone interested in raising awareness, the club is not limited to any cause. If you have a cause that is important to you or would like to join the club, please feel free to contact nbauerme@friars.providence.edu.

Footprints in the Snow

On Wednesdays, We Wear Pink!