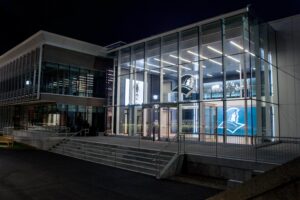 Providence College boasts an impressive Division 1 athletic program and has recently created the facilities to match it. This weekend, PC unveiled the Ruane Friar Development Center, a new facility specifically designed to promote not only the training, but also the health and well-being of all student athletes at PC.

The unveiling was held as part of St. Dominic’s Weekend on Saturday following the Friar 5K, giving alumni the opportunity to go inside the new facility and get a first-hand look at how PC has grown since their time on campus. Rev. Brian Shanley, O.P., Robert Driscoll Jr., associate vice president and director of athletics, Ed Cooley and Jim Crowley, head coaches of the men’s and women’s basketball teams, and Michael Ruane ‘71, benefactor, alumnus, and now namesake of the new center were all present at the unveiling.

Each of the speakers noted that the new center is extremely high tech and is now currently as nice as any other training facility found at other big state schools and institutions. “This building is a replication of what Friartown is,” noted Driscoll in his speech, emphasizing the fact that PC is slowly evolving into a bigger and more advanced college that is being recognized more and more by larger institutions.

The building could not have been built without the support of PC’s alumni network. Coach Crowley noted the level of support at PC, saying he was both extremely humbled and stunned by it. Not only is there a strong alumni community, Crowley said, but also a strong student athlete community at PC. “We needed to get the facilities to match the people,” said Crowley, “and this center builds the already strong community our student athletes already have.”

Coach Cooley emphasized this idea of community saying, “All our players, they’re the reason why we’re here.” He continued, saying, “We are a family and there’s function in family. It is us. It is we. It is together. It is family. We are the Friars.”

Michael and Elizabeth Ruane have donated much to the school in the past, but it was through their donation that the new athletic facility could be built. “No one has been more generous at PC than Mike and Liz Ruane,” said Shanley, “and we cannot thank you enough.”

Michael Ruane spoke at the unveiling, saying that this center is just the beginning. “I look at this development center as a start of a dream, and a dream is a small pillar of a vision.” Ruane continued, explaining that a vision takes hard work, passion, and teamwork by saying, “If you’re not looking at a vision with teamwork then you haven’t set a high enough goal. You can achieve beyond what you thought was possible.”

Shanley noted one of his favorite parts of the new center is the statue found on the steps outside the main entrance of the building. The statue memorializes Joe Mullaney and David Gavitt, two of PC’s most successful men’s basketball coaches. “The number one lesson Dave instilled in me,” Shanley said, “was building a legacy means getting the right people,” and Shanley believes the PC community and staff involved with the creation of the center exemplify that.

One thing Shanley pointed out was that the statue includes Gavitt’s figure sitting on a bench, and next to Gavitt is an empty spot. Shanley hopes that for now the spot will offer as an incentive to visiting alumni, families, or perspective students to sit there and take pictures with the statue when they visit the school. He did say, however, “My hope is that someday there is going to be another figure there: Coach Cooley.”

More details about the new center’s function will come in the following weeks.