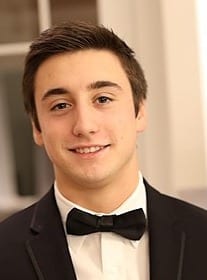 The death of a loved one is never easy, especially when it is unexpected. This past Friday, October 12, the Providence College community lost Augustus Cardello ’21, as he passed away in his sleep the night before.

Gus, 19, was born in London, England. His family later moved to Westport, Connecticut, where he attended Staples High School before coming to PC last year.

Augustus was found by his roommates in St. Joseph’s Hall early Friday morning, and the news of his passing was reported by Acting President Rev. Kenneth Sicard, O.P., at 12 p.m. the same day.

In honor of Gus, the College held a mass in St. Dominic’s Chapel at 4:30 p.m., which was  open to the entire PC community. Hundreds of students attended the mass, paying their respects to Augustus and his family, friends, and parents, who attended the mass.

Counseling for those in grief was made accessible to the entire PC community, and is still available through the Dean of Student’s Office, the Office of Residence Life, the Counseling Center, the Student Health Center, the Campus Ministry Center, and the Chaplain’s office.

Over the weekend, letter boxes were placed in residence halls for students to write notes to Gus’ family and his friends.

Augustus’ wake and funeral will take place at Our Lady of the Assumption Catholic Church at 98 Riverside Avenue in Westport, Connecticut. The wake will be held on Friday, October 19 from 3 p.m. – 8 p.m., and the funeral will take place at 12 p.m. on Saturday, October 20. There will also be a reception following the funeral Mass in the Assumption Gym.

Transportation for all those who would like to attend the funeral will be provided. Students, faculty, and staff can make a reservation for the bus by clicking the link found in an email sent by Fr. Peter Martyr Yungwirth, O.P., this past Monday.

The buses will leave from behind Raymond Hall at 8:45 a.m. on Saturday morning.

Gus’ family has begun fundraising for the Augustus G. Cardello Memorial Scholarship Fund. For all those who would like to donate, checks can be made out to Fidelity Charitable Gift Fund, referenced to Augustus G. Cardello. For more informaton, contact Clapboard Hill Private Wealth in Wesport, Connecticut.

The PC community sends its condolences and prayers to Augustus’ family, friends, and all those affected by the loss. Gus Cardello will never be forgotten by his classmates or the entire Providence College community.

One thought on “Remembering Augustus Cardello”

The Race for Speaker of the House