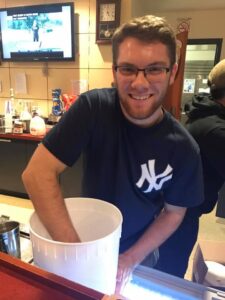 Providence College’s Dominican tradition inspires many students to embody the service oriented, selfless, and spiritual way of life the Dominican friars are known for. Tommy Heavren ’19, has embraced this way of life in his past three years at PC and is planning on continuing to do so throughout his life.

Heavren, originally from West Springfield, Massachusetts, fell in love with the Dominican tradition and service early in his time at PC. “As my four years progress,” Heavren stated, “I have come to appreciate the Dominican presence more and more and realize how lucky we are to be in their care.”

As a social work major and economics and philosophy double minor, Heavren has a heavy course load on his plate. Despite his academic work ethic, however, Heavren has found time to become involved in various extracurricular activities at PC.

Besides working in McPhail’s and having his own WDOM show on Saturday mornings, Heavren is also heavily involved in religious groups and activities. Run by Campus Ministry and Residence Life, Heavren was involved in the Gentlemen’s of St. Joe’s program serving as a peer minister for two years. This year he has taken on a larger role by becoming a peer ministry coordinator. He is also an usher at mass and a member of the Knights of Columbus.

Heavren’s faith has led him to accomplish many things in the area of social work. Rather than studying abroad, Heavren and Daniel Arteaga ’19 were given the opportunity to teach for several weeks at the Bishop Epalle Catholic School in the Solomon Islands through the Fr. Philip A. Smith Fellowship. Living with Archbishop Chris Cardone, O.P., Heavren commented that he “had a spiritual and formative experience teaching, praying, and learning.”

Heavren was also one of six social work majors who formed the Student Advisory Board of Mental Health and Wellness as part of one of their classes last spring. He explained that the board is student-led and meets on Wednesdays in Howley Hall, and they are hoping to futher develop the board this coming spring.

The Social Work Community and Political Practice class that created the advisory board was taught by Dr. Susan Grossman, who Heavren stated is one of his greatest mentors. “Whoever I become as a professional will reflect her model of kindness and care for others,” Heavren said.

Not only has Dr. Grossman had a large impact on Heavren’s life, but the Dominican friars at PC have, as well. “The Dominicans I have met have been some of the most influential and reliable people I have met,” said Heavren, “and I would not be who I am today without them.”

As Heavren gets closer to his final semester at PC, he stated that he is looking most forward to spending his remaining time with his closest friends. “Walking along this journey with them is a special thing and something worth pausing to celebrate every once in a while,” he said.

After leaving PC in June 2019, Heavren hopes to find a job at a non-profit organization, specifically one that empowers young adults to achieve their professional goals.

He currently has an internship at Year Up—Rhode Island, which is a non-profit that provides young adults with the tools they need to become successful in either fulfilling their careers or education.

Heavren mentioned that not only has the Dominican tradition and his time as a part of the Gentlemen of St. Joe’s Program taught him many important lessons and values and helped him grow in faith, but his dedication to social work has also taught him many things.

“Social work has helped me grow in empathy, stand up to difficult challenges of helping others,” Heavren commented, “and my internship at Year Up has inspired me because every day I witness the hard work of our students and how they overcome adversity.”

When asked what advice he would give freshmen, Heavren stated, “Find friends and a few groups you can invest yourself in.” He continued, “Being available to your friends is just as important, if not more important, than other obligations.”

Looking back on his time at PC, Heavren does not regret much, but he wished he spent more time with his friends during his sophomore and junior years and that he volunteered more off-campus to help the homeless. However, as Heavren’s senior year slowly comes to a close, he has been focusing more on doing these things and enjoying the time he does have left at PC.

A Course in Girlbossing and Curious George

Laughing Their Hearts Out

The ISB: A Hidden Gem in PVD